The purpose of the Victim Empowerment Program (VEP) is to provide prevention, intervention, and postvention support and assistance to HCC students, faculty, and staff who have been victimized through threatened or actual sexual violence. It seeks to educate the college community and promote healthy relationships by promoting awareness activities, prevention and education events, and collaborating with internal stakeholders and community resources to promote the healing process of victims of sexual violence.

The College District is already offering IPV supportive services to students, faculty, and staff in a variety of ways. The services however are individualized and not managed as an integrated whole within the College District. The VEP promotes the availability of these services and resources at a broader level, ensuring that anyone who is a victim of IPV or potential victim, has access to these resources to support them in their journey towards survivorship.

The following is the framework of the VEP. It reflects the integration and collaboration of multi-disciplinary teams and services aimed at addressing the diverse needs of victims of IPV effectively and efficiently throughout the College District.

The VEP is divided into the following three components: 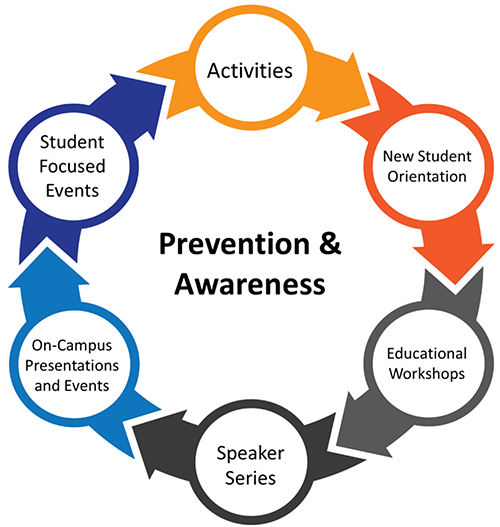 Improve the wellbeing of the campus community by: 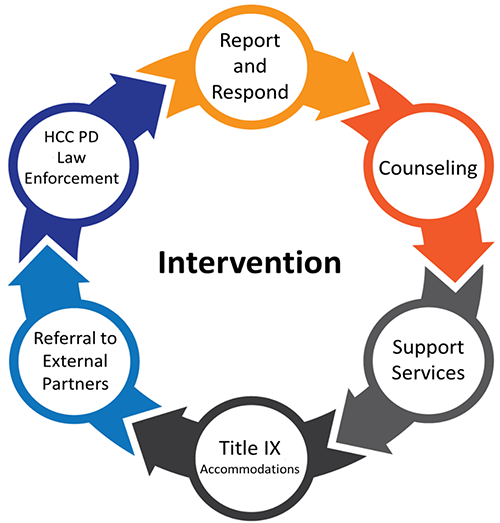 Through a collaborative partnership among counselors, the Office of Institutional Equity - Title IX Office, HCC Police Department, external service providers, and others, the intervention strategy enables the College District to receive timely reports of offenses and intervene early in cycles of victimization. Furthermore, in addition to engaging with IPV victims and survivors, the IPV intervention strategy includes a parallel victim outreach structure whereby offenders are also provided services, safety planning, and information to help reduce further harm. This includes: 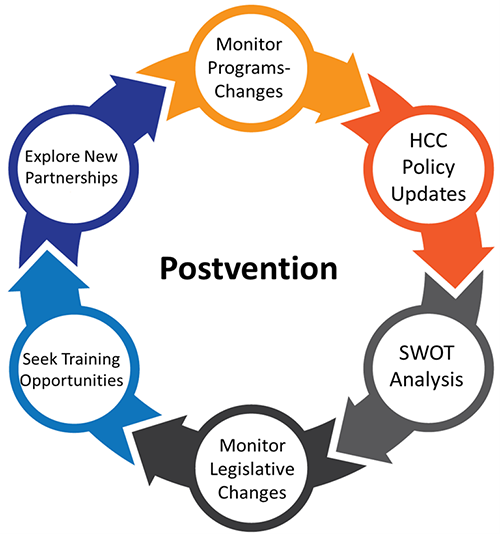 HCC recognizes that communities that are proactive in addressing incidents of IPV have greater success at preventing future incidents. For this reason, HCC included a postvention component as a prevention strategy to monitor and evaluate the effectiveness of the VEP. Postvention is a dynamic process that allows the institution to adapt and institute program changes based on prior learning of the effectiveness of the program. The changes would occur, in part, as a result to revisions in laws and regulations governing IPV, updates to existing institutional policies surrounding VEP, opportunity to enhance advocacy initiatives, the need to expand external resources, which would result in improving the overall program effectiveness to meet the ever changing and diverse needs of our students, faculty and staff.

Intimate partner violence (IPV) is abuse or aggression that occurs in a romantic relationship and may include current and former spouses and dating partners. IPV can vary in how often it happens and how severe it is. It can range from one episode of violence that could have lasting impact to chronic and severe episodes over multiple years. IPV can include any of the following types of behavior:

Who is a victim?

A victim is any person who has suffered harm, including physical or mental harm; emotional suffering; economic loss or substantial impairment of his or her fundamental rights, through acts of IPV. A person may be considered a victim regardless of whether the perpetrator is:

What is Victim Empowerment?

Victim empowerment is an approach to facilitating access to a range of support services for all people who have suffered harm, trauma, and loss through acts of IPV. It is the process of promoting the resourcefulness of victims of crime and violence by providing opportunities to access services available to them, as well as to use and build their own capacity and support networks and to act on their own choices . Hence, empowerment may be defined as having (or taking) control, having a say, being listened to, being recognized and respected as an individual and having the choices one makes respected by others (moving from victim to survivor).

Victim empowerment aims to restore the loss or damage caused by acts of IPV and their consequences through a variety of actions intended to empower the victim to deal with the consequences of the event, to leave it behind and minimize or diminish the suffering and loss due to the IPV event. It is premised upon the belief that individuals, families, and communities have the right to privacy, safety and human dignity, and that victims should play a more central role in their healing process.

Victim support is the empathic and person-centered assistance rendered to an individual following an incident of IPV. Through victim support aimed at victim empowerment, the victim is restored to a state as close as possible to that existing prior to the offense and ideally to a state where the person has been able to learn and grow.

It is important to recognize that victims do not all have the same degrees of need for empowerment and support - there is a diversity of needs. In order to enable the disempowered victim to recover from the exposure to IPV, such needs must be met through an integrated, multidisciplinary team approach. By empowering victims in a holistic manner, it reduces secondary victimization, encourages victims to remain active in their education, promotes cooperation with the criminal justice system if needed, reinforces socially desired behavior, and acts as a deterrent to offenders or potential offenders. Victim empowerment thus has the potential to prevent and reduce sexual violence.