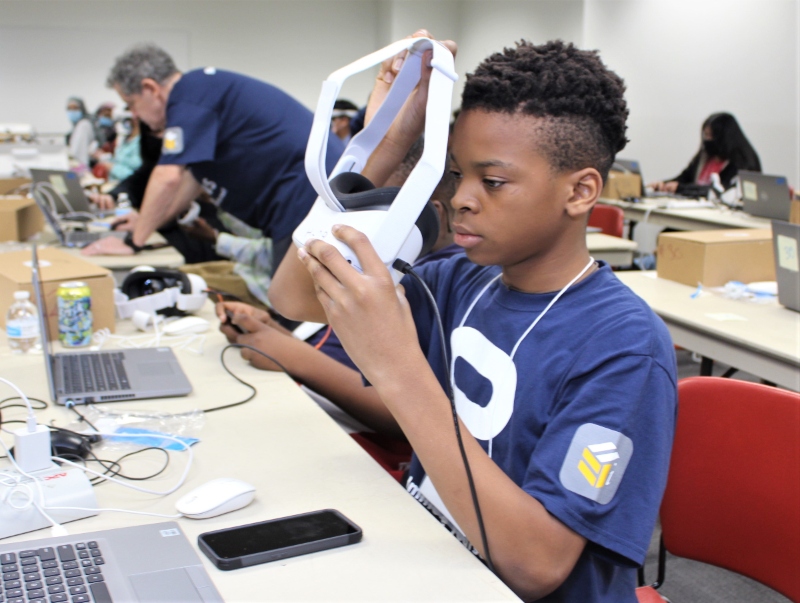 Eeleojo Ukwenya adjusted the headset he was wearing and became frozen in time, as the world of virtual reality transported him to an office setting that he created hours earlier on his laptop.

“I’m building a virtual room and navigating it,” said Ukwenya, 11, who attends Sugar Land Middle School. “It feels kind of weird because I’ve never done this before. At first, I was really shocked because I had no forearm … just hands. But I got used to it. It’s actually pretty amazing.”

Ukwenya joined about 40 middle- and high-school students who attended the weeklong STEM Summer Virtual Reality (VR) Camp in June at HCC West Loop campus. They learned how to build, interact and manipulate a virtual reality environment.

The basic VR skills the students learned are the building blocks for careers in all facets of virtual reality, said Raymond "Mitch" Keller, professor of cybersecurity and networking at HCC Southwest. He noted that VR jobs abound in health care, law enforcement, manufacturing, and other fields requiring safety training.

“It gives them an opportunity that they might not otherwise have had to see the possibilities of new and emerging technologies that are available,” Keller said. “There’s a lot of groundbreaking work that’s being done in VR. The camp allows them to experience things first-hand and to see if they're interested in pursuing them further in their careers and education.”

During the summer camp, part of the college's community enrichment initiative, the young students got a chance to tour and experience the VR lab.

Khavian Nguyen, 14, a Kerr High School freshman, said she had second thoughts about attending the camp, but her reservations quickly went out the window when she discovered how much fun it was.

“The fun part is using the Oculus headset,” Nguyen said of the device that allowed her to navigate in a three-dimensional space, moving around to manipulate the surroundings. “And I like building the (virtual) room because it gives me a chance to be creative.”

Looking ahead, Nguyen plans to become a doctor or veterinarian, predicting the skills she’s learning now will help her future career.

“Because technology is always growing, by the time I graduate from high school it’ll be 2025, and from college it should be 2030-2035,” she said. “There’ll be a lot more technology than we have now.”